Cranes for passion: a history of work and dedication

The O.M.V. Mechanical Workshops VICARIO S.a.S. was founded in 1971 by the VICARIO brothers, who had acquired more than a decade of experience in the production of lifting equipment and cement mixers.


The new company operates initially in 2000 sq. m., thanks to the quality of the machines and the favorable economic moment. international market.

The continuous growth of the company led, in 1973, to the acquisition of a large industrial area near Gattico, where it currently occupies an area of ??50,000 m². >


In 1992, the company supports a productive center for the resale and rental of construction equipment, which completes the service offered to customers.


Since the birth Vicar cranes have been known for quality and efficiency very accurate workmanship.


Thirty years of experience, the search for innovation, the updating of technologies and the most recent national and international regulations demands of the modern market in terms of product quality, performance and security.


Currently the production of the O.M.V. Mechanical Workshops VICARIO S.p.A. It is exported and appreciated all over the world.


The news of the millennium

Years 2000-2003. The Vicario range of hydraulic self-erecting cranes is enriched with new models with three-phase and single-phase power supply, with standard inverters and three speeds; for all movements and rapid braking of the rotation movement


Year 2005. First the Vicar produces a self-erecting crane with a 42m boom, transportable in shape on articulated lorry without removing the towing carriage.


Year 2007. First the Vicar produces a self-erecting single-phase crane, with a capacity of 2200 kg, a 27-meter boom and a working height of over 23 meters, without the aid of telescopic elements


Year 2008. La Vicario designs, manufactures and markets a 21m self-erecting boom crane equipped with a drawbar and carriage, which can be approved for road towing at 25km / h or 80km / h without removing the counterweight


Year 2008. La Vicario designs, produces and sells a 27m boom self-erecting crane equipped with a drawbar, fifth wheel coupling and carriage, which can be approved for road towing at 80km / h both as a trailer and as a semi-trailer, with a counterweight that can be moved using a remote control to reach the chosen configuration.


Years 2009-2015. Numerous new features are introduced also in the standard range, with a 38m outreach model and the upgrade of existing models, such as the fully hydraulic 30m and the 16m


Year 2016. The Vicar designs and starts the series production of a new hoist winch, which guarantees a capacity of 4000 kg with two rope branches shooting


For the latest news & agrave; and information on models for fast road haulage visit our contacts 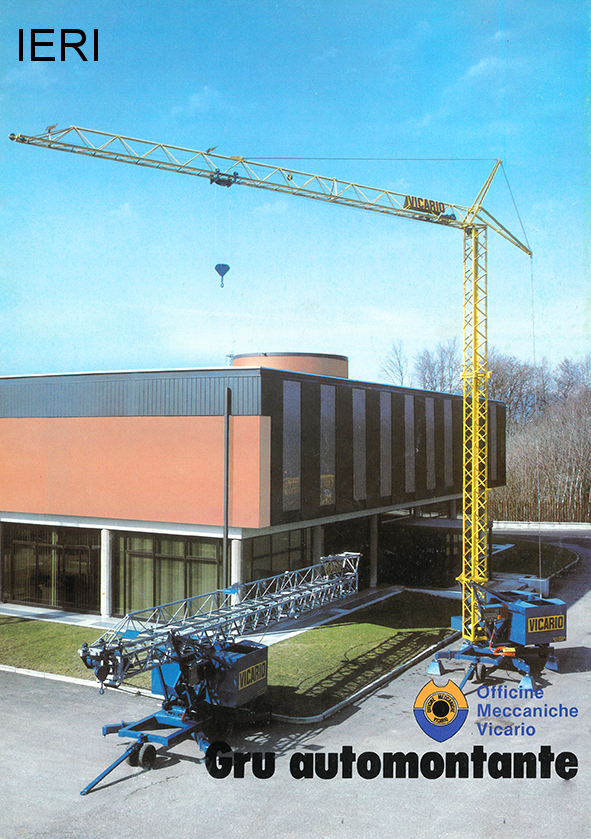